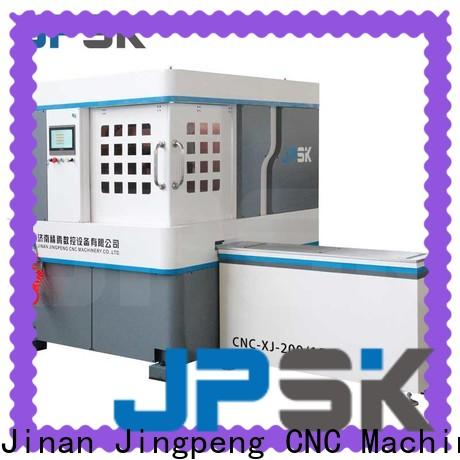 Company Features
1. In the fierce market competition, Jinan Jingpeng CNC Machinery Co.,Ltd has grown continuously.
2. Jinan Jingpeng CNC Machinery Co.,Ltd is powerful with its advanced equipment and high production efficiency.
3. We measure ourselves and our actions through the lens of our customers and suppliers. We want to build strong relationships with them and deliver quality products and services.
Product Message
Latest Product
JPSK long lasting hydraulic shear factory for for workshop for busbar processing plant
JPSK cnc busbar chamfering machine supplier for plant
high quality metal shearing machine inquire now for bend the copper for aluminum busbars
JPSK accurate sheet metal punching machine on sale for U-bending
Relevant Articles
New order from Sri Lanka
We have a new order for our hydraulic busbar punching machine and the hydraulic electric pump from Sri Lanka.The punching range of the hydraulic punching machine (CH-60) is 10mm (thickness). It has to cooperate with the electric pump. Sri Lanka, the full name of the Democratic Socialist Republic of Sri Lanka (The Democratic Socialist Republic of Sri Lanka), formerly known as Ceylon, is a tropical island country located in the Indian Ocean and one of the member states of the Commonwealth. In ancient China, it was called the Lion Country, the Shizi Country, and the Sinhala. Sri Lanka's economy is dominated by agriculture, and it is also one of the world's three largest tea producing countries. Its greatest advantage lies in mining and geographical location, and is known as the "jewel island". Sri Lanka is a founding member of the South Asian Association for Regional Cooperation and a member of the Commonwealth, G77, Non-Aligned Movement, and the United Nations. It is currently the only South Asian country rated as "high" in the Human Development Index.ColomboDalada MaligawaPinnawala Elephant Orphanage
Read More>>
New order from Myanmar
We sold two of our hottest busbar machines to Myanmar.The hottest busbar machine is JPMX-303ESK. It’s a CNC busbar processing machine. It has three major functions, cutting, punching, and bending for copper and aluminum busbars.The processing range is 12mm(thickness) * 160mm(width).E-mail:info@sdjpsk.comWebsite: www.sdjpsk.com www.jpbusbarmachine.comThe Republic of the Union of Myanmar, formerly known as Hung Sawadi (English: the Republic of the Union of Myanmar, Myanmar for short), is a member of the Association of Southeast Asian Nations. There were human activities in Myanmar in the late Paleolithic period 10,000 years ago. On January 4, 1948, Myanmar separated from the British Commonwealth and declared its independence, forming the Union of Myanmar. Myanmar has a tropical monsoon climate. Famous scenic spots include Shwedagon Pagoda, Gandaki Royal Taihu Lake, Inle Lake, etc. Myanmar is rich in mineral resources, including oil, natural gas, tungsten, and tin. Myanmar is a country dominated by agriculture, with more than 60% of the population engaged in agriculture. Agricultural products include rice, wheat, and sugar cane.Shwedagon PagodaKaraweik PalaceInle Lake
Read More>>
New order from Morocco
We have a new order from a Morocco customer.He ordered two of our busbar processing machines.JPMX-301B and JPMX-303ESK.JPMX-303ESK is a CNC busbar processing machine. JPMX-301B is a manual combined busbar processing machine. They are all for copper and aluminum busbars’ processing.JPMX-303ESKJPMX-301BIf you have demand in busbar processing machine, contact us.E-mail:info@sdjpsk.comWebsite: www.sdjpsk.com www.jpbusbarmachine.comThe Kingdom of Morocco, or Morocco for short, is a coastal Arab country in northwest Africa. It borders Algeria in the east and southeast, Western Sahara in the south, the Atlantic Ocean in the west, and Spain and Portugal across the sea to the north.The earliest inhabitants of Morocco were Berbers. It was successively ruled by Phoenician, Roman Empire, and the Byzantine Empire. The first Arab kingdom was established in 788 AD. From the end of the 15th century to the beginning of the 20th century, Morocco was invaded by colonists such as France and Spain. It became a protectorate of France in 1912, and a narrow area in the north and an area in the south were designated as a protectorate of Spain. Independence in 1956. It was named the Kingdom of Morocco on August 14, 1957. Morocco occupied Western Sahara in 1979, and its rights in Western Sahara have not been recognized by any country in the world, but the League of Arab States clearly recognizes Western Sahara as Moroccan territory. Morocco believes that its borders, Ceuta and Melilla, should be its territory, but it is actually under the jurisdiction of Spain.In addition to Arabic, there are many local languages in Morocco, and French and Spanish are also used at the same time.ChefchaouenThe archaeological site of WallubilisCasablancaHassan II Mosque
Read More>>
New order from Romania
We got a new order from Romania of our hot-selling busbar machine of JPMX-301A.JPMX-301A is a combined copper busbar processing machine. It has three functions, punching, cutting, and bending.It is combined with three portable busbar processing machines.The processing range is 10mm (width) * 150mm (thickness).Romania. Developed European capitalist country.Romania is located in the northeast of the Balkan peninsula of southeast Europe, Ukraine and Moldova and neighbors from Serbia and Hungarian border, near the black sea, covers an area of 8391 square kilometers, Romania has a long history, the ancestors of Dacia, merge with the Romans mold, after the formation of Romanians, a century has formed three principalities, on December 24, 1918, the principality of Transylvania merged with kingdom of Romania, Romania formal unification.Peres PalaceBlack ChurchDanube Delta
Read More>>